How To Keep Fleas Out Of Your North Texas Home

Fleas are pests that truly bring meaning to William Shakespeare’s quote, “mighty things from small beginnings grow.” Even though these pests range from 0.1- to 0.32-centimeters long, they have uncanny capabilities. Not only can fleas jump more than a foot high, but they can do so up to 30,000 times in a row—talk about a workout! They can also lift 150 times their body weight.

These pests are a problem for North Texas homeowners and elsewhere because fleas transmit disease, manifesting as sickness. Not to mention, it’s certainly unsettling to imagine these tiny insects crawling on you as you sleep—and they indeed wait patiently nearby for their hosts to do so. 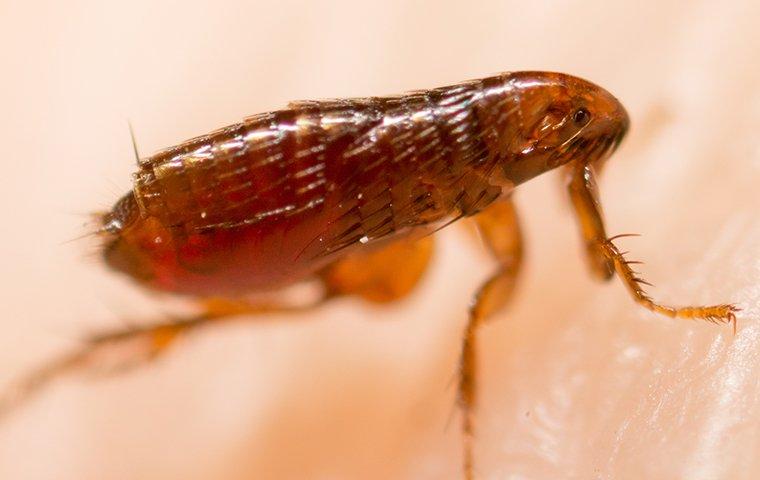 The Lifecycle Of Fleas In North Texas

Although fleas can live for up to a year and a half in optimal conditions, their average lifespan is anywhere from 30 to 90 days. During this time, fleas undergo four life stages, including egg, larvae, pupa, and adult flea.

Depending on the surrounding conditions, namely temperature and humidity, flea eggs will hatch between one and ten days, becoming larvae.

Flea larvae, which look like C-shaped flecks that are pale or dark in color, are free to move around depending on when they last ate. For five to 20 days, flea larvae will feed on flea dirt, which includes flea excrement and host blood.

When flea larvae are ready, they will spin into a pupa or cocoon. The adult flea will then remain in the cocoon for anywhere from three days to up to a year, waiting for a host before it emerges. If an adult flea cannot find a host within seven days of emerging from its pupa, it will not survive.

The Diseases Fleas In North Texas Can Transmit

There are four common diseases that fleas can transmit in North Texas and elsewhere, which include:

Flea-borne parasites, including tapeworms, can also spread to people and their pets if they were to swallow fleas that have been infected accidentally.

Although pest control services are the most effective measure to prevent fleas, there are a few natural flea prevention tips that North Texas homeowners can use. Here are three:

The most effective way to get rid of fleas for good in your North Texas home is with help from local pest control professionals. Adam Song of Adams Exterminating Company has over a decade of industry experience and holds some of the highest industry certifications available.

If you suspect fleas or other pests in your North Texas home, call Adams Exterminating Company today at 888-966-9043.