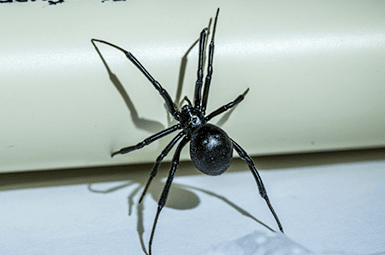 They look creepy to many folks, they spin webs that feel disgusting on your skin when you walk through them, and some can cause infection or send you to the hospital. Spiders are a creature that some people love and others loathe. Even if you do not have a phobia of spiders, it's not really a good idea to make them welcome in your home. The most common spiders in North Texas include black widow spiders, brown recluse spiders, jumping spiders, and wolf spiders. Here’s what you need to know about these spiders and how to control them.

Black widow spider - The black widow has an hourglass-shaped marking on their abdomen. These spiders are feared because their poisonous venom is up to 15 times stronger than that of a rattlesnake! If you get bit by a black widow spider, you can experience nausea, muscle aches, and paralysis of the diaphragm which may make breathing hard. Bites are not usually fatal unless the victim is elderly, ill already, or a small child, but the damage they can cause is still significant. Black widow spiders are not aggressive unless they are acting in self-defense.

Jumping spider - Due to their appearance, the jumping spider is often mistaken for a black widow spider. Jumping spiders may also be brown, tan, or gray and often have white, yellow, blue, red, or green markings on their bodies. While most spiders are nocturnal, the jumping spider prefers the daylight. They do not build spider webs, but when they jump they employ a silk “dragline” so they can ride it back to safety. They’re unlikely to infest homes, but sometimes get inside on clothing or on plants that are brought indoors.

Wolf Spider - The wolf spider gets its name because they chase and leap on their pray just like a wolf does. They are hairy with a camouflage appearance, having orange-brown coloring with black and gray splotches or stripes. Like many spiders, the wolf spider will only bite if threatened or provoked. It is not deadly, but a wolf spider bite is painful, and some people may be allergic to wolf spider bites.

Common do-it-yourself spider control methods, such as eliminating clutter, destroying webs, and vacuuming thoroughly, are generally ineffective in eliminating a current spider infestation in your home. Spiders are great at hiding, so most do-it-yourself methods will only get rid of spiders you happen to see in plain sight, leaving all of the hidden ones free to infest your home. Adams Exterminating Company offers effective spider control solutions in North Texas to eliminate spider infestations and prevent new infestations in your home. With a year-round pest prevention plan, you will have dedicated professionals minimizing or removing the conditions in and around your home that are favorable to spider survival. With fewer pests around to feed on, spiders will have harder time multiplying, and by bringing our expertise and tools to the table, Adams Exterminating Company can rid your home of annoying and potentially dangerous spiders completely.