Thanksgiving and festival season are approaching quickly, but in Lewisville, ant season is year-round. As temperatures drop, these tiny critters will begin scouting your home for scraps and crumbs to bring back to their colonies. Learn about the different types of ants below and how to spot and prevent them. 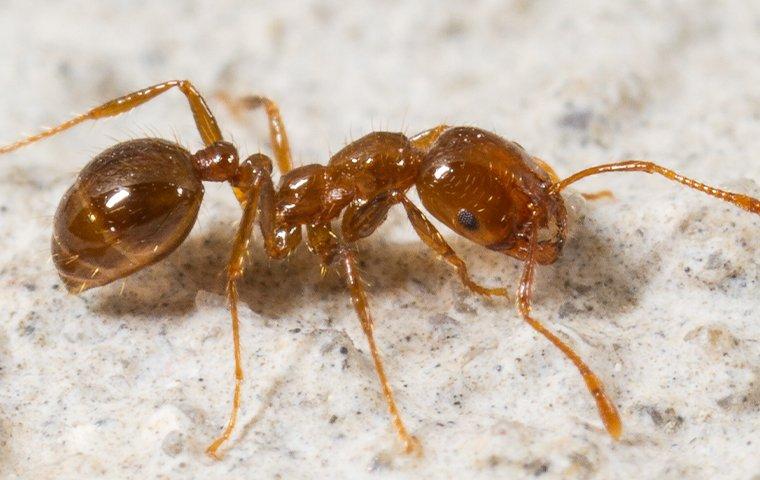 Common Types Of Ants In Lewisville

Five types of ants are common in Lewisville: acrobat, carpenter, fire, odorous house, and rover. While most of these ants look alike to the naked eye, there are key differences in their appearance and in the threats they case.

What problems do ants cause?

Acrobat ants typically inhabit the outdoors, but damage from carpenter ants or termites allows them to enter your home as well. While their sting is rare and just briefly painful, they can get into food and emit unpleasant odors. They can also strip insulation from electrical wires.

Carpenter ants tend to nest in areas with damp, rotted wood. They’re common in kitchens but can appear anywhere where it is dark and damp, such as crawl spaces or wall voids. Though they rarely bite and cannot spread diseases, their wood-destroying behavior can compromise the structural integrity of a building and rack up thousands of dollars in damage.

Fire ants are the most dangerous of the five. They deliver painful stings that leave large, itchy welts. They tend to swarm all at once and deliver multiple bites very quickly. Some people experience an allergic reaction as a result. Since they’re dangerous to wildlife, they can also be a hazard to pets. They tend to colonize around sidewalk edges and driveways.

Odorous house ants are less dangerous but just as annoying. When squished, they emit an odor that smells like rotten coconuts. Nesting places include areas around pipes and heaters, inside wall voids, and underneath carpets and flooring. They are relatively harmless but are a huge nuisance as they infest food and stink up your space.

Rover ants tend to nest outdoors under stones, leaf litter, and landscaping ties. Indoor nesting areas include potted plants, bathrooms and kitchens, electrical outlets, shingles, and wall voids. They are especially attracted to locations with moisture and fungal decay. No stingers and no biting make them harmless, but they can easily infest homes due to their small size.

Should I use DIY ant traps and sprays to eliminate ants?

Spraying down a line of ants with ant poison might feel satisfying, but it won’t help in the long run. Thousands of ants can inhabit just one ant colony/ They’ll keep coming back regardless of how many you kill. If there’s a food source and points of entry, ants won’t leave.

You might be tempted to purchase insect barrier sprays to seal those points of entry, but these are ineffective and harmful to you and your family. Some sprays contain compounds that affect hormones, which may increase neurobehavioral symptoms like low IQ and increased rates of ADHD in children.

Common advice is to reduce spills and messes, but these are inevitable in life. Once a scouting ant gets a taste of a food source, they’ll report back to their colony, and you’ll get a swarm of ants in your home. Leaks also cause ant infestations and are hard to spot and expensive to fix. They may exist for weeks and attract ants before you can take care of them properly.

What is the best way to deal with an ant infestation?

DIY ant extermination is time-consuming and difficult. Put your trust in the hands of Adams Exterminating Company. We’ve served the Lewisville, Texas community since 1996 with our high-quality pest control services. No ant is a match for our well-trained technicians. To request a free estimate, use our easy contact form or call us at (888) 612-6372.